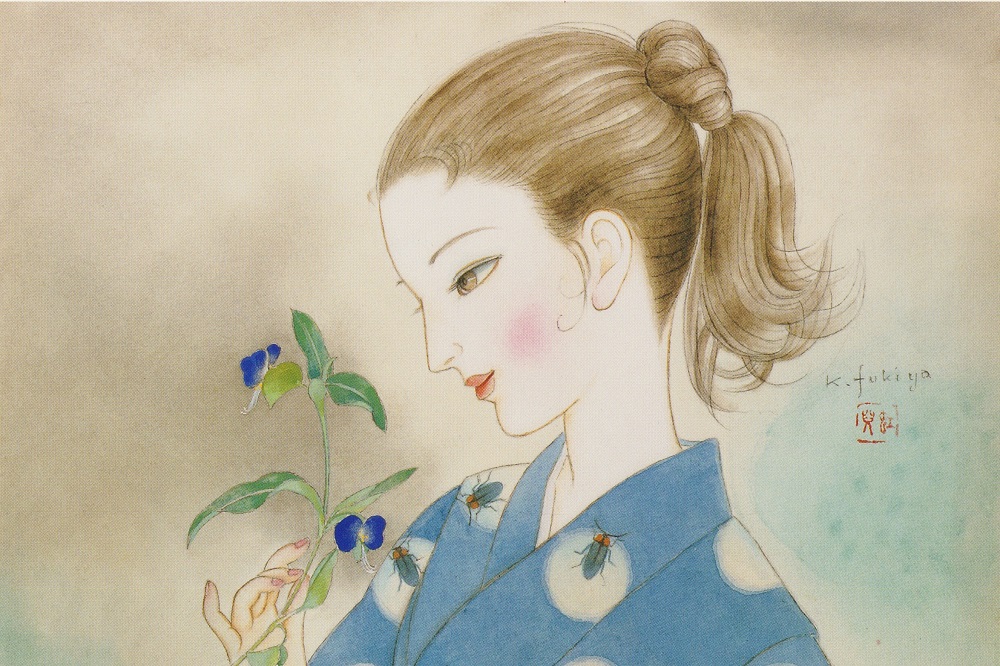 Fukiya Koji (1898-1979 Niigata pref.) was an illustrator who was frequently featured in girls’ magazines from the Taisho to Meiji periods. He decided to go to Tokyo to be a Japanese artist when he was 14 years old. Being well treated by Takehisa Yumeji, an Japanese artist, Fukiya made his debut drawing on the cover art for Shojo Gaho (the girls magazine) when he was 21. After that he also created the illustrations for serialized newspaper novelettes, the cover of Reijokai, and the cover of the box for a book of poems that would become a favorite, Hanayomeningyō, and he became a star artist in the blink of an eye. In 1925, in order to properly learn to draw, he went to France and got many invitations to salons as an artist of L’école de Paris. Upon returning to Japan in 1929, he used the line drawings from girls’ magazines and colorful modern style to create lyrical portraits of girls, among other things, and neared the height of his popularity. After the war, he illustrated Andrew Lang’s world-renowned Fairy Books, Issun Boshi, The Little Mermaid, and other picture books. In his later years, he continued creating art pieces depicting the beauty of young girls and drew fascinated crowds of visitors to his art exhibitions for many years.

In the early stages of Japanese animation, Fukiya was invloved in the establishment of Toei Animation (originally Toei Doga, Ltd.). This influenced the forerunner of Japanese animators, Osamu Tezuka, as well as Academy Award-winning animator Hayao Miyazaki.

A well-known work from his later years, Bride, inspired commemorative stamps that achieved record-breaking sales. This stamp was widely used for wedding invitations. From these successful sales, the Fukiya Koji Exhibit was featured for the commemorative opening of the Postal Museum, located near Tokyo Station.

Fukiya Koji Memorial Hall, where his original pictures and articles are shown, opened in 1987. The Russian Orthodox Church style building was chosen to be the selection out of 100 public architectures.


APP of JapanTrips
Save information with APP and enjoy Japan more.